With the Lencenor region being essentially the entire Kingdom of Lorent I decided that to help balance out the game I needed to include some rival independent lords that would stand in the Lorentish King’s way. In Europa Universalis 4 France is sometimes regarded as the “big blue blob” as they often become very powerful and take over a lot of provinces and countries (becoming a huge blue blob on the map) – however this is delayed for a few years as France in 1444 is not fully united:

With this France has to first finish the Hundred Years War and take back land from England, as well as figure out how to deal with Provence and Burgundy to take all the lands in the French Region under their control. In addition they’ll have to decide whether to take on Brittany (and whomever their allies are) and create the modern French borders we know.

With consideration to this, I decided to do the same with Lorent! Lorent on its own is even more of a powerhouse than France will be, as the region in my world is even larger and full of more provinces: so I’ll have to bring this divided kingdom theme up to 10.

The Wine Lords of Lorent 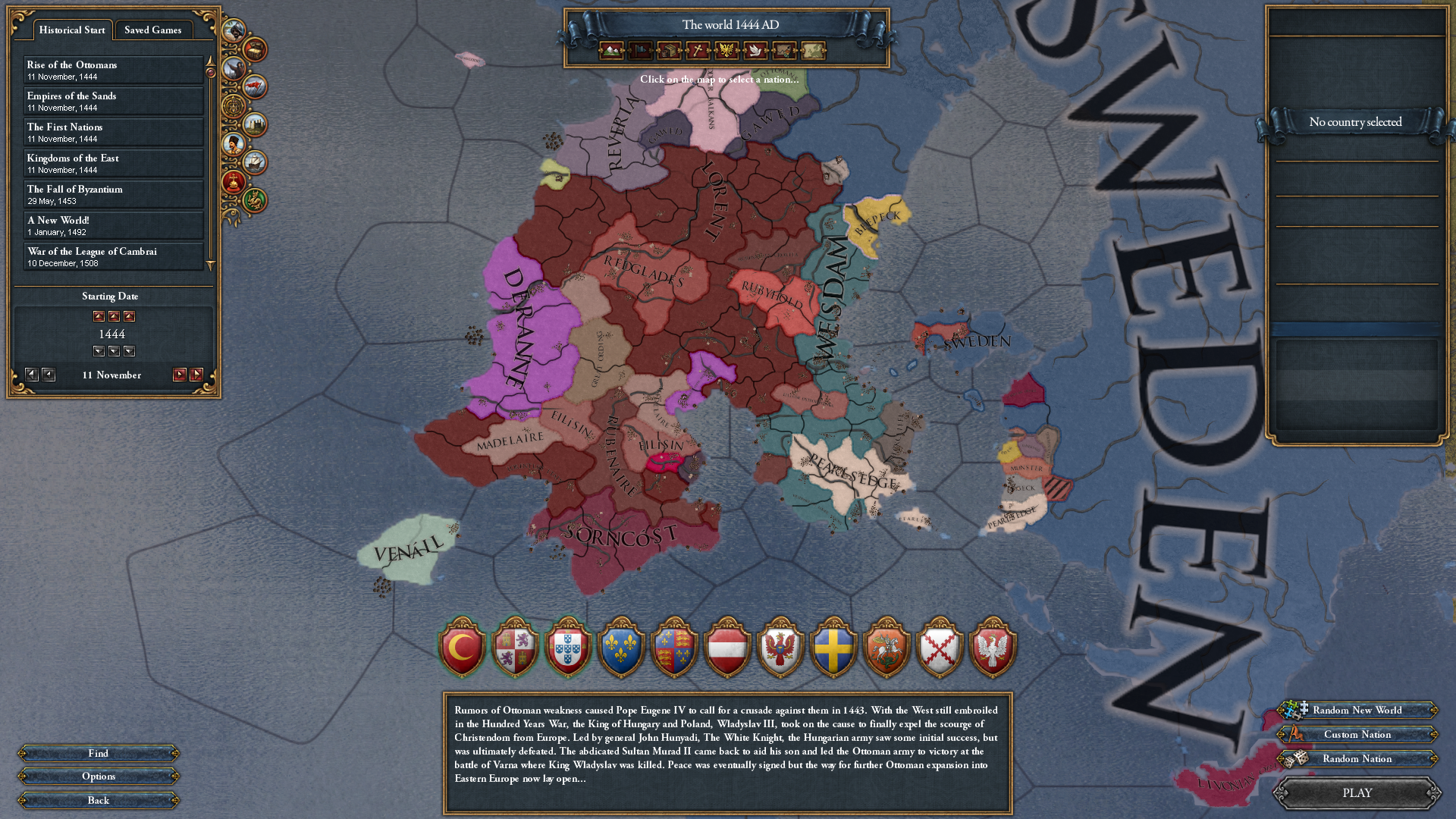 With this I was adding trade_goods (such as grain, iron, or wine) to provinces and remembered that one of France’s main exports is wine! So I decided to play around with that as a reason for powerful lords to rise up against their King: The Wine Lords of Lorent.

I knew that many famous wines were essentially named after their home region (Champagne, Armagnac, etc) and decided I could kill two birds with one stone: I was having issues with naming provinces and now I can put a name to a Wine Lord!

With that I went through various names to essentially find out what kind of fictional wines worked best. By then I had already created the Duchy of Sorncóst (meaning Southcoast in my version of Elven) and decided that a “glass of Sorncóst” works pretty well. I also had another country (not in Lorent but might as well) Pearlsedge and decided having a white wine called “Pearl” sounds cool too, and thus the “Pearl Vintage” and “Pearl Modern” was born, and with it the provinces of “Old Pearlywine” and “New Pearlywine” respectively.

I also had a prominent river running from Lorentainé (the capital of Lorent, meaning Lorent-by-the-river) westwards to Deranne that had more wine lords such as Rubenaire (meaning Ruben’s City), Madelaire (meaning Madaléin’s City) and Eilísin (meaning Eilísbrook) that were dotted along the river.

Though I did have an issue at first: the river flowed west and up and the Bay of Wines was south – so how did that add up?

I ended up moving the river to flow south and exit at the Bay of Wines instead!

Note the wine-making provinces along the Bloodwine River (that flows through all the major cities above) and the poorer trade good provinces that make grain in the Lorentish Flats to the west.

Of course the Wine Lords aren’t much of a threat if they are relegated to just the Bloodwine River and the Bay of Wines, so I gave them other provinces throughout Lorent.

Here we can see Rubenaire flow south into the lands of Sorncóst (a Wine Lord that has no power in the Bay of Wines, which will be a possible objective for them) as well as provinces to the north of Rubyhold up north. Eilísin also has provinces west in the Lorentish Flats as well as some within the Empire of Anbennar itself right next to Wesdam. I also made Madelaire a Personal Union partner of the Imperial Duchy of Wesdam so that Lorent will have to fight their former allies, Wesdam, as well as The Empire of Anbennar if they want to truly unify all Lorentish lands.

Other players in the Bay of Wines include Wineport, the richest wine city of them all ruled by merchants who export the other’s wine above, as well as the Minaran Temple – a religious group following the Minara, the Goddess of Celebrations and Lust, who have also been an active player in the wine business. The Minaran Temple came about as I was looking at the history of wines and realized that many monks made wine in their spare time, with the most famous being Dom Pérignon.