For the past 1-2 weeks i’ve been working on a Vertical Slice for the mod as well as getting back into EU4 modding in general. I’ve shown off what I had so far in Honours Blog #10 so this post will cover mostly the creation of my own custom countries, provinces, cultures and religions as well as the localisation related!

And if you’re curious, here’s what it looks like in-game so far: 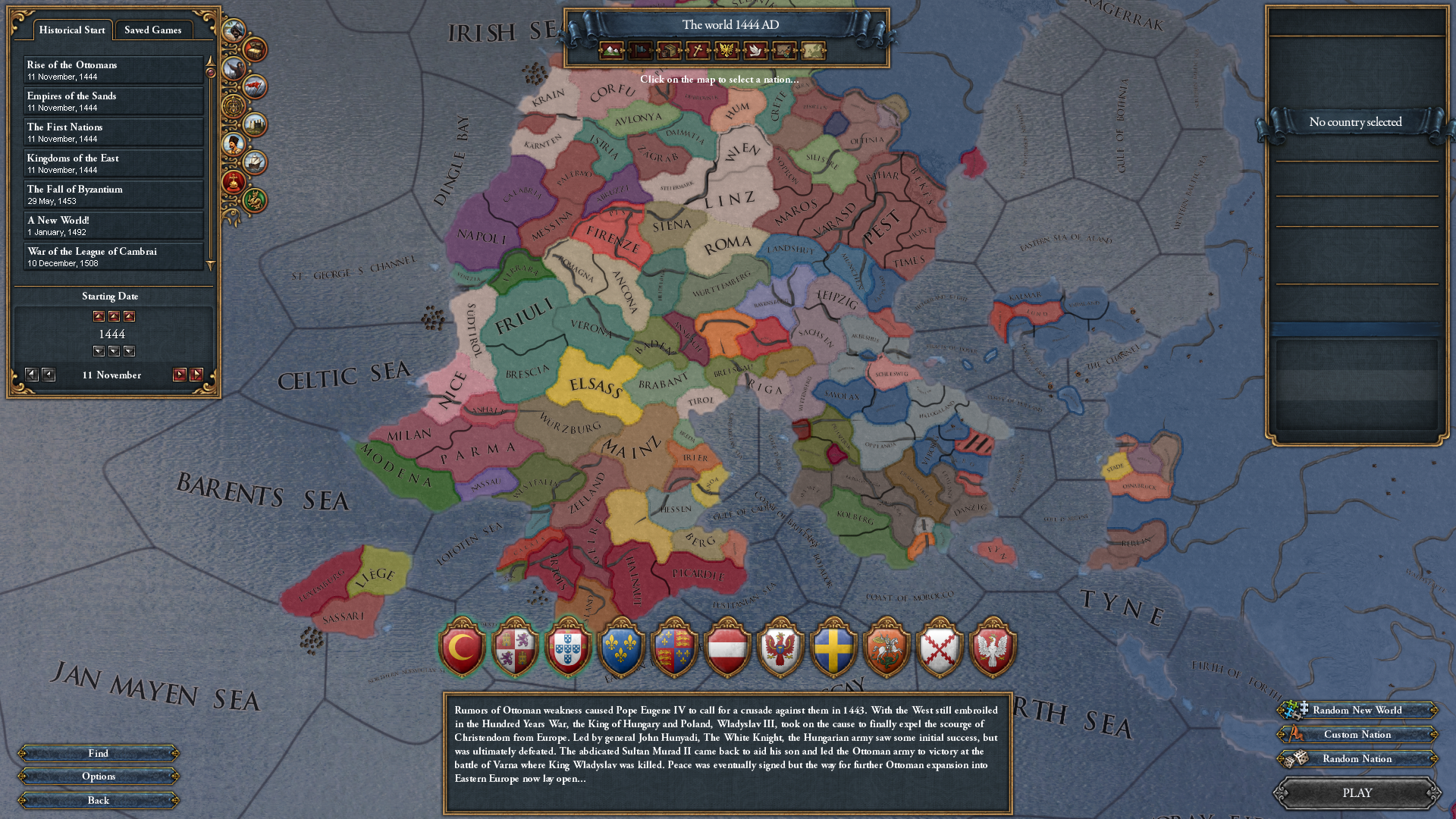 Thanks to Cyridius’ guide on Making a Nation this was pretty straightforward, with the only real issues being the multiple files needed for making a country:

So to make a country you need:

The text files to the left show two versions of Riga, with the first image being the original vanilla province and the second being a modified custom version

Several other things have been changed such as cultures and religions (which we’ll get to later) as well as the three main stats: tax, production and manpower – as well as thr type of trade good

There’s other special modifiers here too like the dauvaga_estuary_modifier – when I make a province properly i’ll either have to delete these (if the province has no estuary, which is likely the case) or make my own modifier which is as simple as changing the name, for example test_estuary_modifier.

As i’m not remaking the definitions (which had province IDs and RGB values) I need to keep the default province names, apparently if I rename “34 – Riga” into something else the game won’t recognize it and just use the vanilla “34 – Riga” file

Each province has a culture, and each country has a primary culture and accepted secondary cultures.

To create my own cultures I copied and pasted the base “0_cultures.txt” and renamed it to “anb_cultures.txt” which makes it seperate from the vanilla ones when the game is loaded. This also means that those existing vanilla cultures are still there in my mod but of course they eventually wont be used, the only reason I chose to keep the “0_cultures.txt” instead of overwriting it is to prevent any dependency issues (for example, X event refers to French cultures – what happens if I use the event but french cultures dont exist?)

At its core the cultures.txt file is comprised of:

The last thing we need to finish off our showcase is a religion! Again, each province has a religion and each country has a religion (for example France is Catholic, the Ottomans are Sunni Muslim)

As this is a fantasy mod, my main inspiration for the deities was your classic pantheon of gods which were both prominent in real-life such as the Roman, Greek and Norse Gods or in fantasy like the gods of Dungeons & Dragons’ Forgotten Realms. I’ve already worked out a rough idea of the main gods of the cannorian_pantheon so all I need is to put them in game!

Each religion has different mechanics and in our case the most suitable mechanic was the hinduism religion, which makes use of the personal_deity mechanic allowing players to select a new patron god every time they get a new ruler

Again, like the cultures, I didn’t replace the existing “0_religions.txt” but made my own “anb_religions.txt” (anb meaning Anbennar) to keep dependency errors to a minimum

In addition to that, I need to make my own variant of the personal_deity, like other Paradox modding all you need for this is editing a text file once again. The image to the right shows that off, with the deity castellos and the_dame showing different benefits if you pick them as your patron (eg Castellos grants -1 unrest)

Putting it all together

With that sorted I went through various provinces and created custom variants of my own for the mod, changing the owners and other stats as shown, ending up with this below:

As you can see there’s some custom countries in there like Deranne, the aforementioned Lorent, Redglades and others.

There’s also existing vanilla EU4 countries like Milan and Sweden in there as they hold a small number of provinces, for this demonstration I wanted to focus on big countries to create and show off.