Anbennar is a fantasy world of my own making, which was also made into reality as a fantasy total conversion mod for the strategy game Europa Universalis IV (EU4).
It’s a D&D-esque fantasy setting at heart, which makes it familiar and easily understandable which works well for new IP, as to me I care more about telling interesting stories and scenarios than creating a totally unique setting for unique’s sake.
Instead of the usual medieval fantasy world, the mod is actually set in the same Renaissance-Early Modern time period of EU4: this means we’ll be exploring we’ll be exploring how ideas such as colonialism, the rise of the nation state and the advent gunpowder warfare impact your traditional high fantasy world. 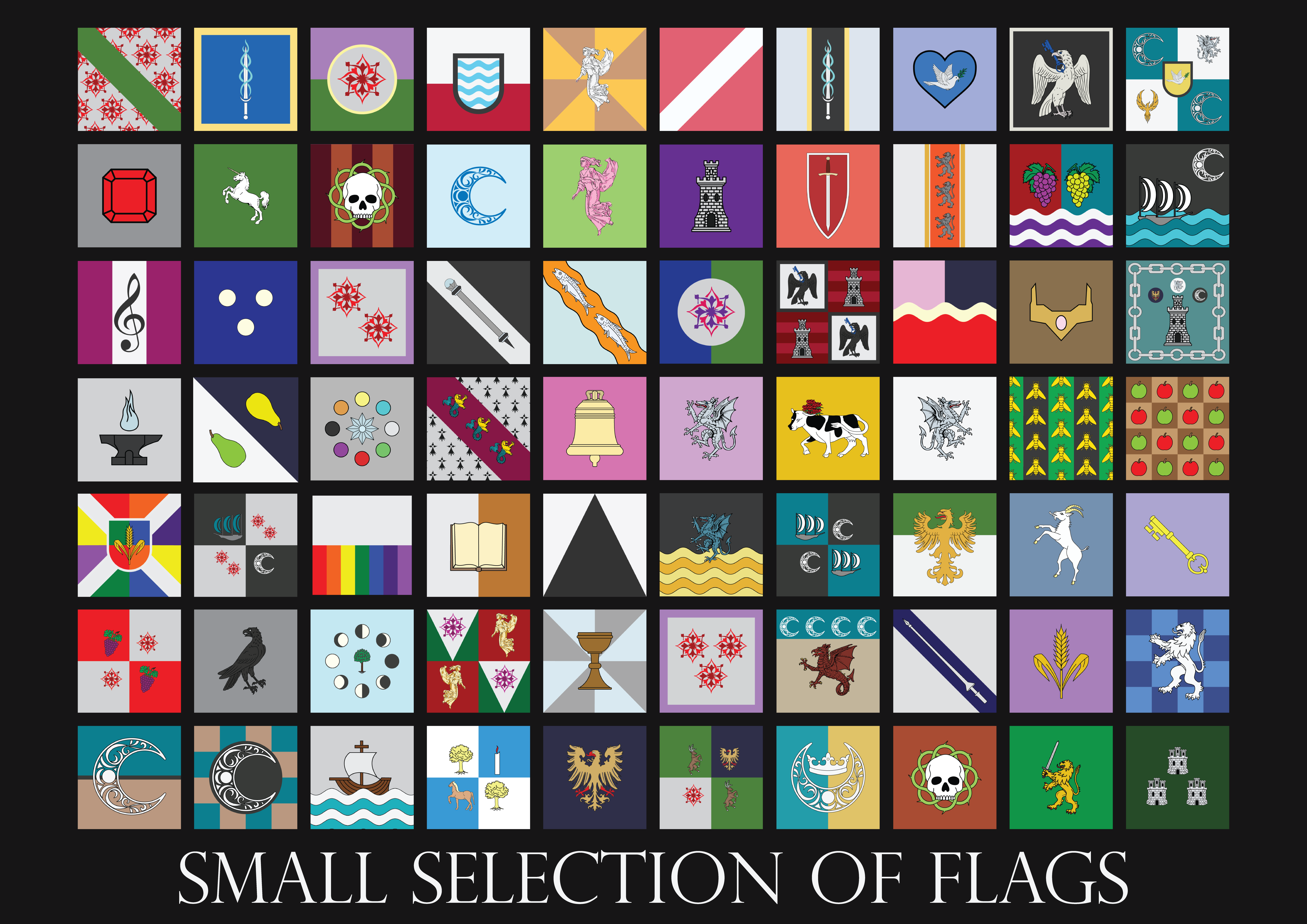 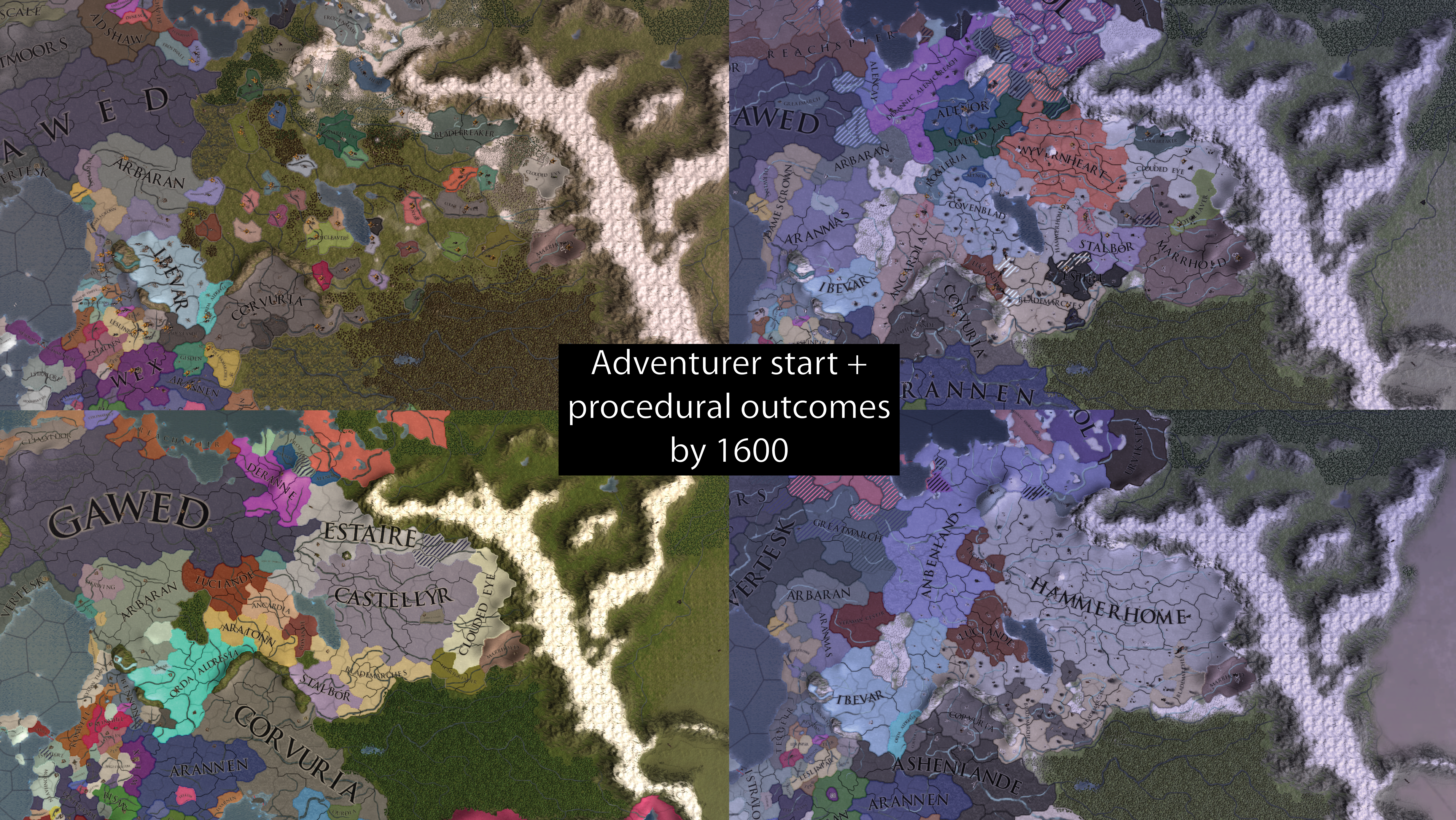 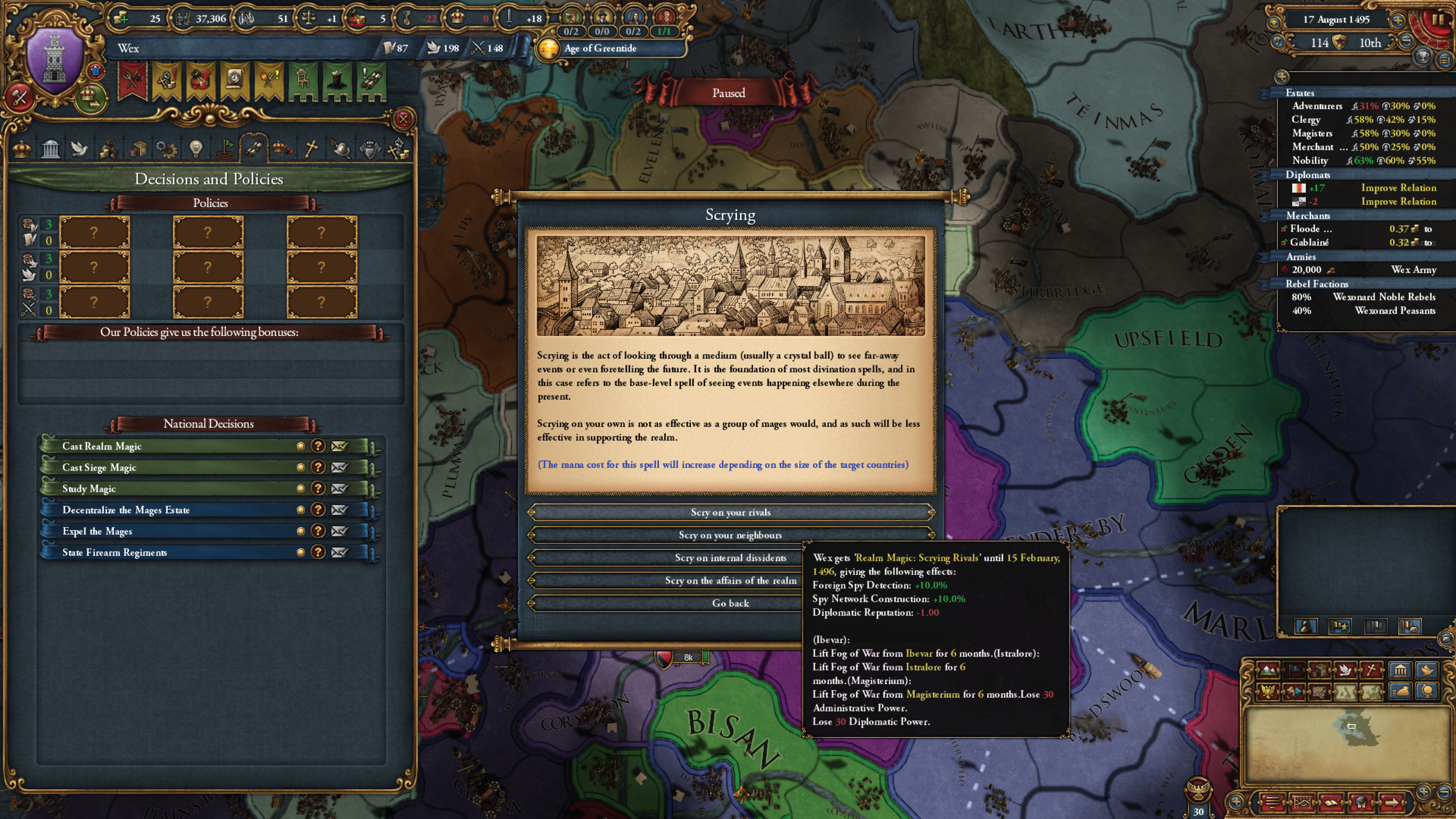 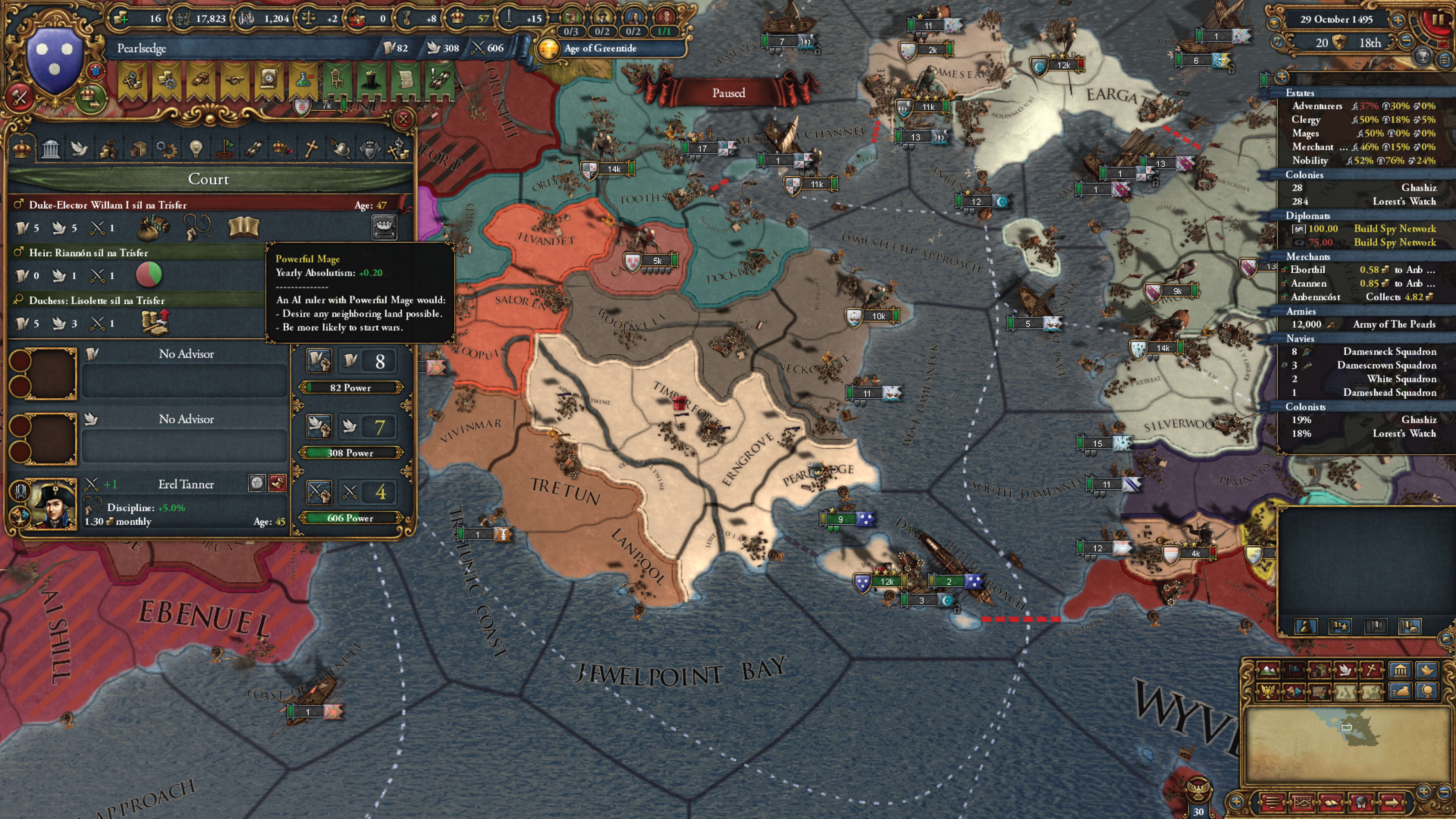 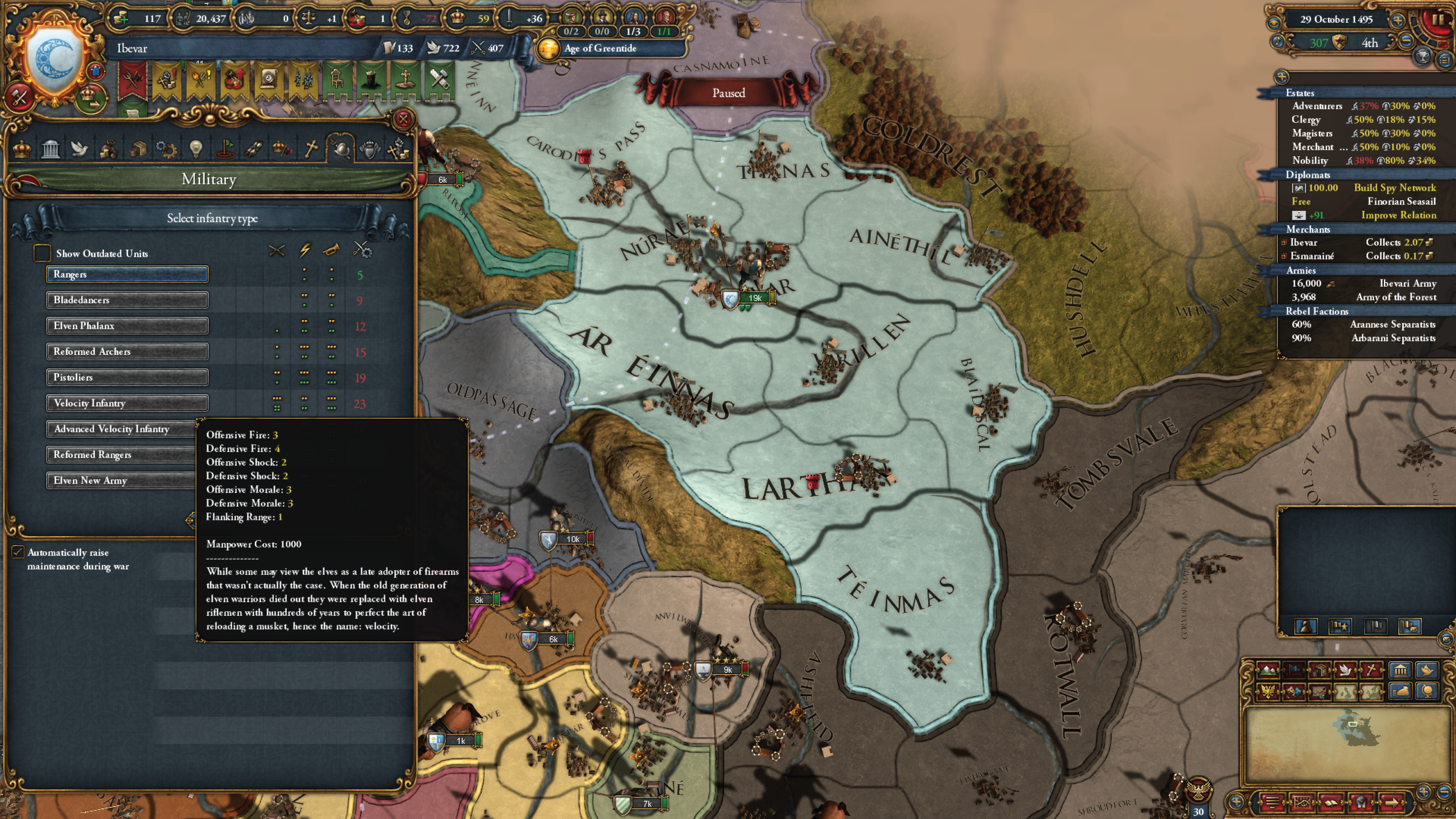 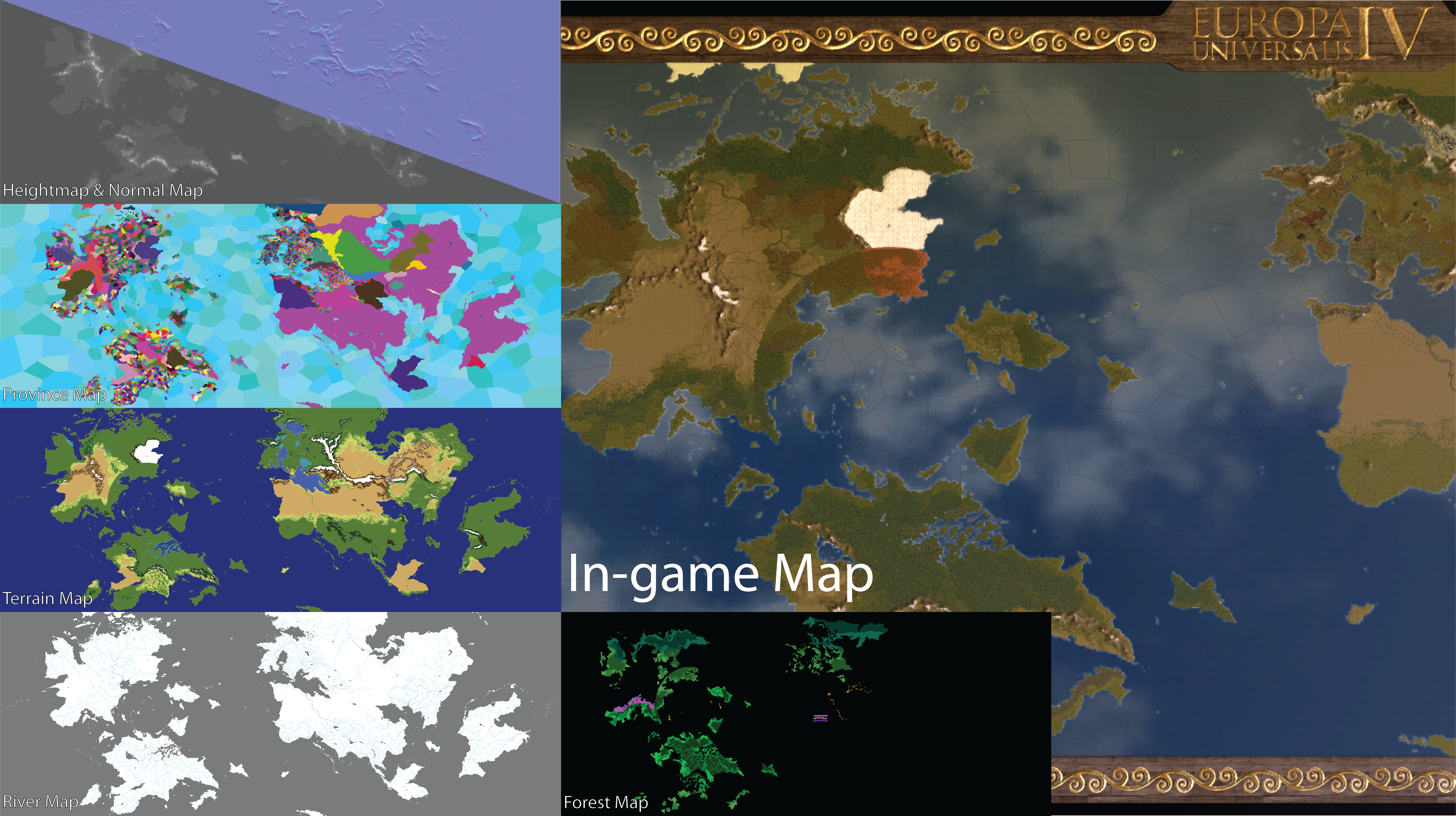 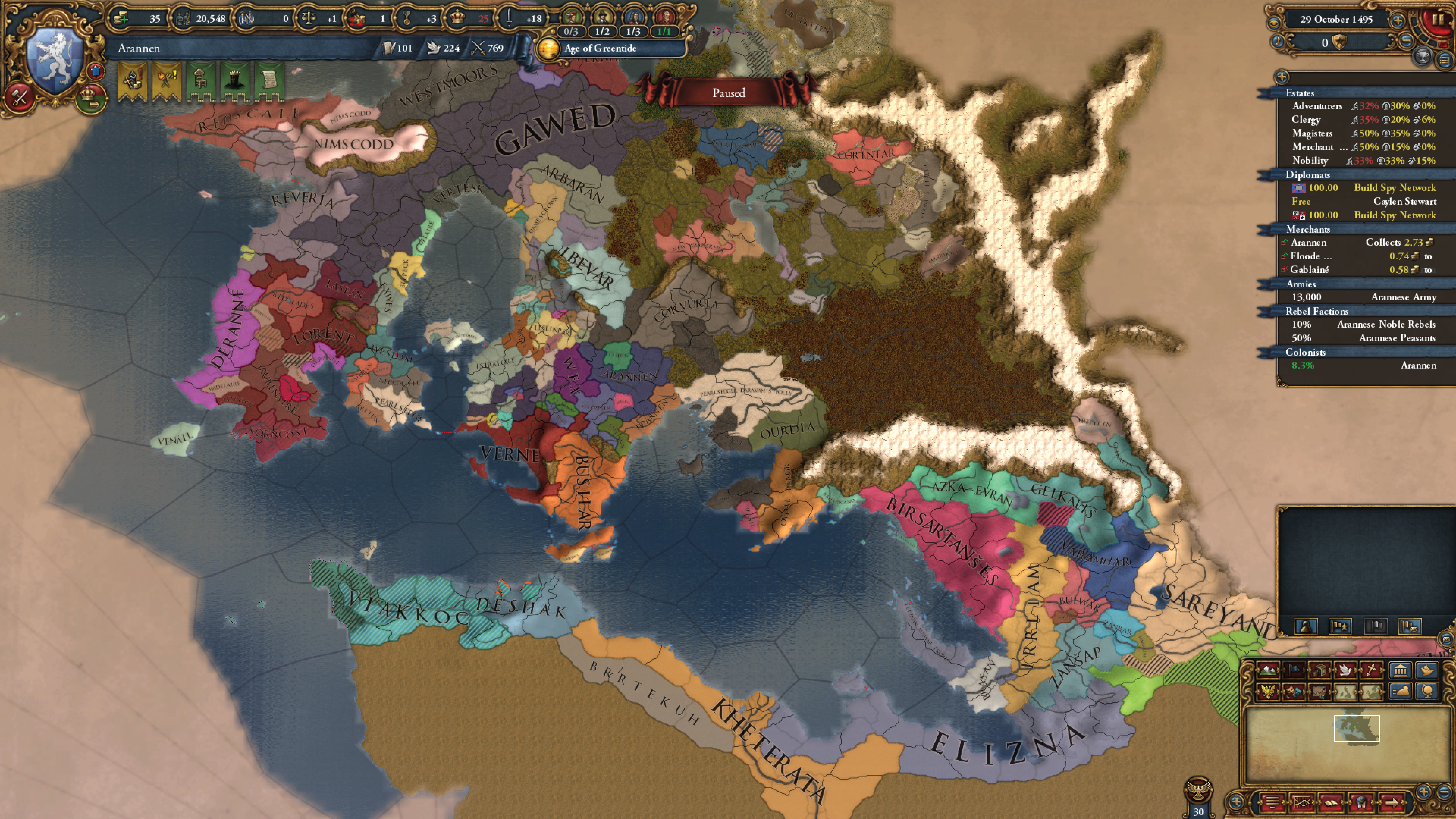 Anbennar began as part of my honours project during my final year of university, in which I looked at:
If you want to check out my dissertation, click: here

Anbennar has since has since grown into a massive collaborative worldbuilding project that’s resulted in art, music, fanfiction, and even D&D campaigns being played already! The mod has become one of the most popular total-conversion mods for Europa Universalis IV, and has been featured by the developers Paradox Interactive in a Dev Clash and is also a common sight on Twitch and YouTube (if you fancy a short watch, I recommend the first 5 mins of this video). Recently, we’ve also announced a Crusader Kings III prequel which was featured on the likes of PCGamer, which is honestly absolutely bonkers.

In addition to this, I’m also currently working on a novel based within the Anbennar setting!

For the lore of the Anbennar setting, see the: primer and wiki
For memes and other hijinks visit the: subreddit
For a fan-made TVTropes: here
Steam Workshop: link
So development-wise… what actually did I do?
In short, a hell of a lot. Pretty much everything you can touch in EU4 modding, i’ve done. This includes making new content like countries, writing a heap of text on things like events and tooltips, creating new systems, making a hell of a lot of flags and more!
Here’s some specifics according to disciplines:
If you have ~30 mins to spare and would like an in-depth look at everything, here’s my honours project portfolio which explains all the processes and thinking I had to go through to make this back in 2017-18

-heavy worldbuilding and research in any and all other subjects – this includes histories, cultures, earth sciences like plate tectonics, cartography, pretty much anything and everything

-writing a book set in the world!

-writing all manner of things for the mod, which can be seen in more detail in the content design section below or the screenshots above

-vision-holder for the entire modding project. This includes feedbacking on new countries and lore proposals, creating lore and art briefs, editing any and all written works for the mod to ensure that the vision and themes for regions, storylines and parts of the world is consistent throughout

This is a combination of both programming the content in addition to implementing the descriptions and narrative for said content. This formed the bulk of the work needed for the mod, as different content is what makes Anbennar different from vanilla EU4.

(Note that modding Paradox games is be done solely through any image and text editor like Photoshop and Visual Studio Code rather than an engine. Paradox games uses their in-house scripting language, jomini)

-setup of a country as a game entity (e.g. determining things like its name, what government it has, what name lists it uses)

-creation of special attributes/ideas for each country (for example, in vanilla EU4 Great Britain had an idea that gave them a boost in naval combat)

-pop-up events (ranging from things like one-off historical events, flavour, or systems-related ones such as the path to achieving lichdom as seen in the screenshots above

-new internal factions (estates) for the countries to interact with, such as the Mages Estate representing the magical population in your country

-project lead for the entire modding project. This includes feedbacking on any and all content. Similarly to the one in Narrative Design, my main goal is ensure coherence with the vision and themes of the world. In this case, coherence with the intended gameplay experiences as well as balancing the relationship between lore and gameplay (the ideal, to me, is that lore serves gameplay, and gameplay serves lore)

Re-using existing vanilla mechanics and their components to create new experiences, in addition to creating new systems entirely, though as EU4 can be really clunky we tend to avoid incredibly bespoke systems and work within the constraints and vanilla design philosophy. This section pairs with the content design section above, as the events written from a content design perspective are one of the components within a greater system.

-Creation of an adventurer system, which allowed a entirely new way to play EU4 never seen in the base game, where you can start as small adventuring company and use the existing colonization systems to effectively grow and build your country from scratch

-A racial minority system to overcome limitations of population simulation in the game. In EU4 each province can only have 1 primary culture (in our case, also race). This system simulates living minority groups within that province: for example a human province might have a large elven minority. That minority has its own system to allow it to migrate or be expelled from the province, as well as mechanics around allowing the player to influence their country’s treatment and tolerance of that race.

-A magic system through the lens of a grand strategy game (think scrying rather than fireballs), allowing your ruler to not only cast magic spells according to D&D’s eight schools of magic – this stretched to magical projects, allowing you to achieve things such as lichdom