Skip to content
This is a blog for my Gameplay Prototyping module at university. For this module I had several ideas but after discussing with my module tutor we settled on one that had more potential for gameplay iteration. 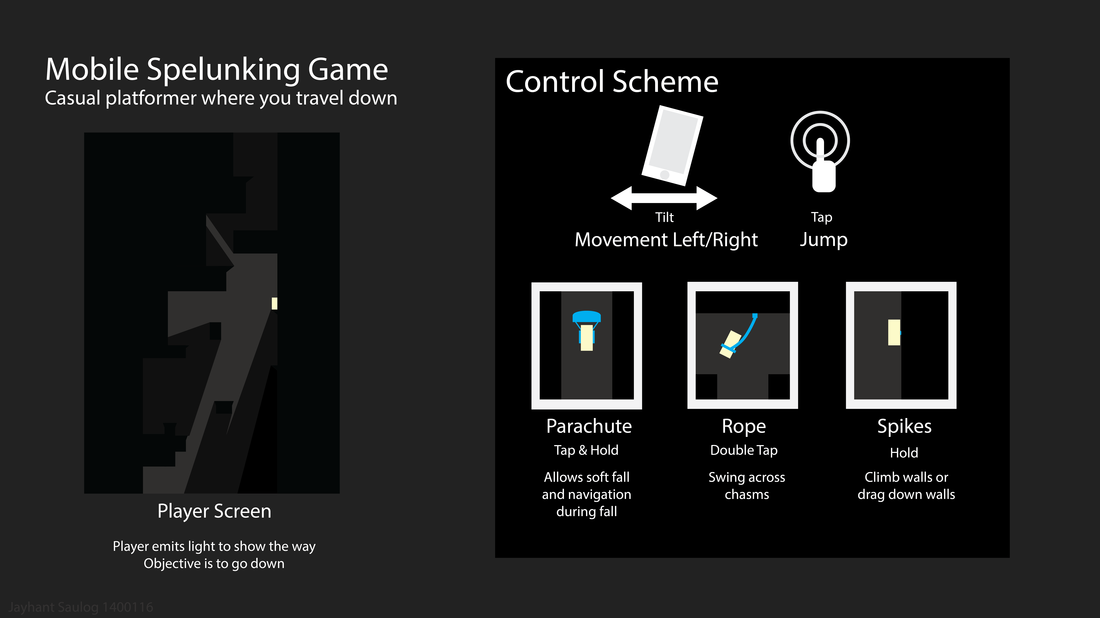 I always liked the spelunking (cave-exploring) parts of games like Minecraft and Terraria, and I’ve yet to make a game with mobile-in-mind so I thought this would be a best a time than any.

In short, what I want to make is a casual ‘vertical’ platformer for mobile games in mind. The challenge with mobile platformers and mobile games in general is the lack of control inputs, for this game I am designing with mobile in mind and will attempt to have multiple actions be done by using only one input: the Tap. Movement will instead be handled by tilting the phone, hopefully making the experience simple and understandable enough to reach the casual target audience.

As you can see below the progression are set up in a way that each ‘spot’ is a level and the player goes down a ‘road’ as they complete levels, in our case my progression will have the player going on a downwards road to keep with the vertical spelunking theme. 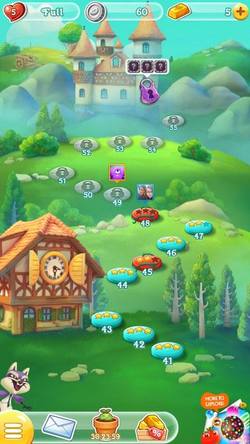 For our module we’ll be using Unity and programming it ourselves using C#.

Personally I have more experience in Unreal than Unity but my programming history goes back to Sixth Form when I did Visual Basic. In university we did a year of C++ which familiarized me with object-oriented programming {and brackets!}, since then I programmed an enless runner StarRunners Snapshot in GameMaker Script as well as a Sidescrolling Painting Game The Brush is Mightier than the Sword in Flash’s Actionscript.

My recent experiences in programming have mostly been with visual scripting in Unreal 4’s Blueprints so getting back into C# will be part-remembering and part-learning. 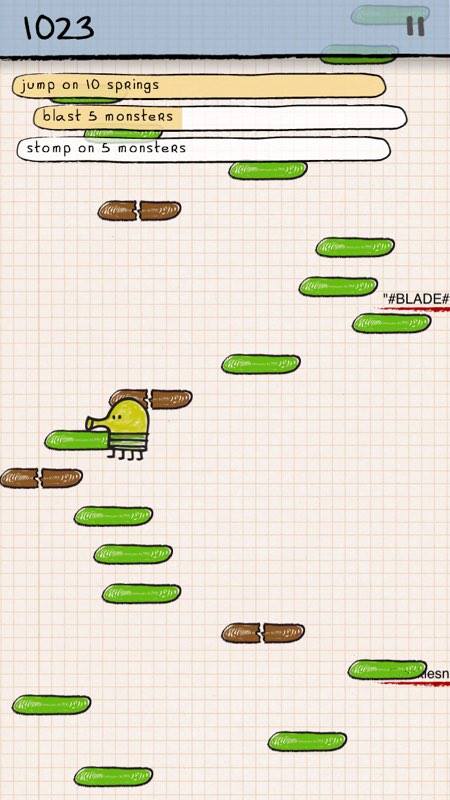 Doodle Jump forms the jist of the control scheme, with the player tilting their phone for movement to go up – in our case we’ll be going down and instead of jumping platform to platform we jump across chasms. 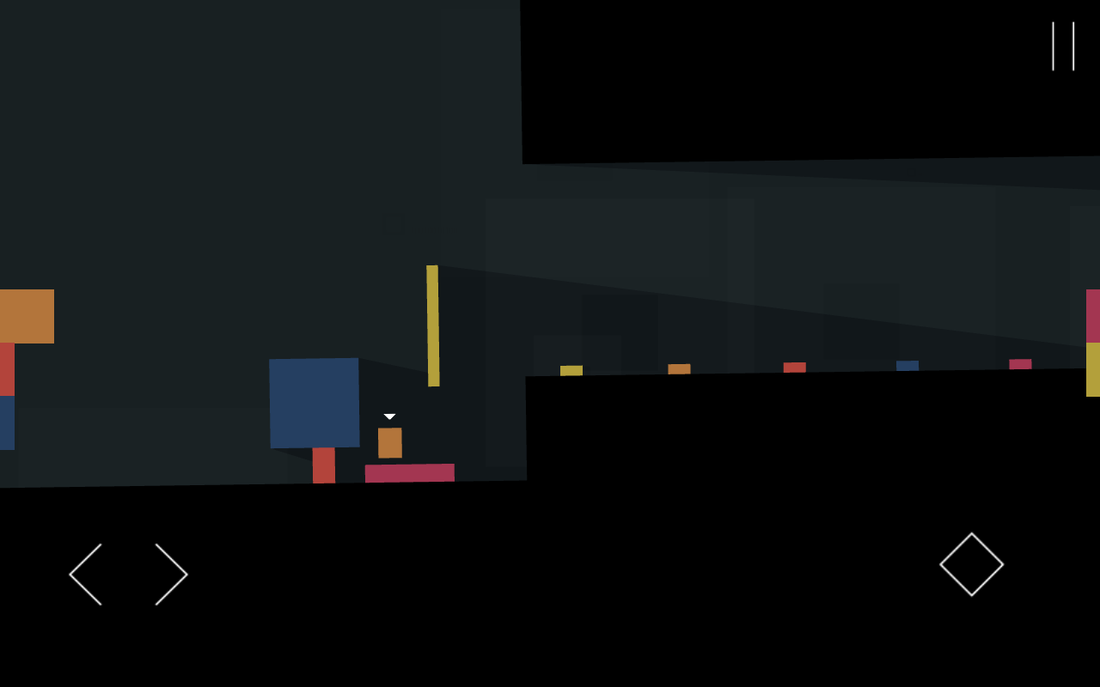 Thomas was Alone is the primary inspiration for the game’s art style, its simple and minimalist which seems to resonate a lot with pretty much everyone, it’s also an art style that I personally like very much and allows me to focus on the gameplay than the art in the grand scheme of things. 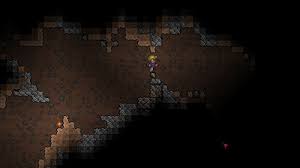 A lot of the ‘game-feel’ of going down is inspired by Terraria, where falling to your death is a legitimate concern and exploring dark caves with light is the major key to success. Also: a wide range of equipment and gadgets at the players disposal.

Downwell is a game that focuses on vertical gameplay which is what my game focuses on as well. Downwell however takes a different take and focuses on arcade-like retro graphics and fast-paced gameplay, moreso on destroying opponents and enemies in your path than navigating caves.

My game in comparison would be more suited to ‘pick-up and play’ and not require intense dedication, it would also have slower paced gameplay and rely more on platforming and problem-solving than adrenaline thrills. 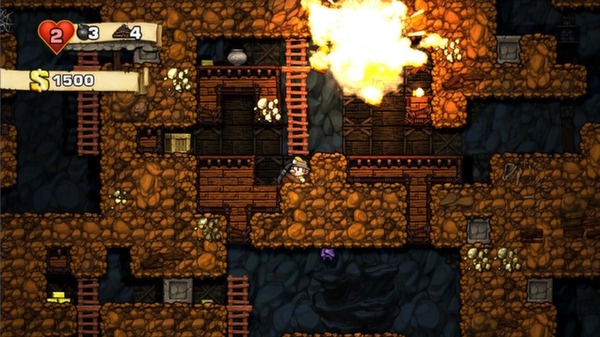 It’s a spelunking game is it not?
Spelunky is another good example of an arcade-esque platformer with a focus on repetition and procedurally generated levels. Ideally my game would focus on simplicity and progression than difficulty and rogue-like repetition, it would have some sort of randomised element but with the Saga Format (aka Level 1, Level 2, Level 3) the game would have more fixed patches of level blocks than your typical procedural game

There was also a recent video on Spelunky’s level-generation which brought to light how exactly it was done and designed:

With the minimalist art style I researched Thomas was Alone’s ability of 2D racyasting: apparently Thomas was Alone was done in 3D but just had an Orthographic view so shadows were with ease.

However after searching on how to do 2D Raycasting I found a simple and free way to do 2D Light Raycasting in the Unity Store: here

I’ll be aiming to implement this into my game as it adds a lot of polish to the minimalist aesthetic and a little polish goes a long way I’d say. 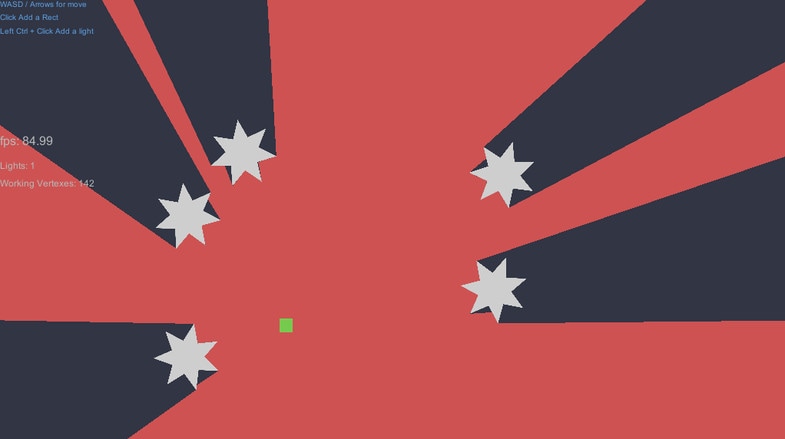 For milestones I decided to center them around core mechanics and features: